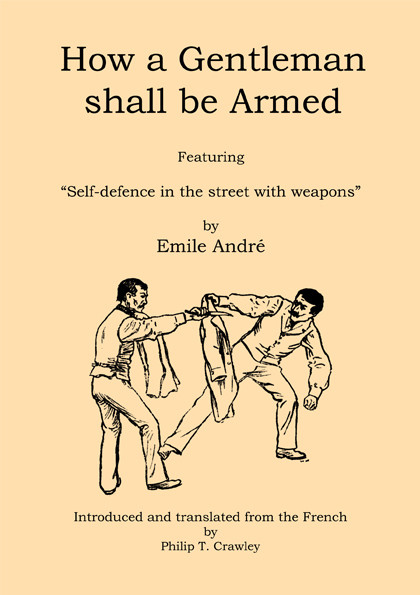 How a Gentleman shall be Armed

La defense dans la rue (lit. “Defence in the street”) developed in the late nineteenth and early twentieth centuries as a response to the rise of the French criminal underclass; gangs of notorious professional thieves and robbers preying upon the wealthy middle and upper classes to relieve them of the contents of their pockets. Professional fencing and boxing teachers recognised that their skills in the sporting arena had become not only somewhat limited by rules of “gentlemanly” conduct but also overly elaborate and thus set about to reintegrated the various martial arts of the era to create a complete package of skills that worked at a variety of ranges and would cover all eventualities. These teachers did not shy from also considering weapons for personal protection, reasoning that if the criminal was proficient in their use then a gentleman should have no qualms either. This book contains Emile André’s advice on the use on not only the walking stick, an everyday item for the era, but also the knife, truncheon and even swordstick and pistol for the edification of historical martial artists, re-enactors and historians alike.

Save this product for later